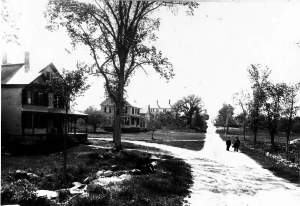 A Brief History of Hebron

March 7, 1777, the General Court of Massachusetts passed a resolution granting to Alexander Shepard "the unappropriated lands lying in the county of Cumberland in the Province of Maine...." on the condition that Shepard "shall deliver in to this Court to their acceptance, on or before the last day of September next, an accurate map of all the late Province of Maine,..."
Shepard apparently satisfied the General Court and he was granted June 24, 1779, a parcel of land in the Oxford Hills of Maine which became known as Shepardsfield.

The settlers of Shepardsfield Plantation petitioned the General Court to incorporate the town of Hebron, and the incorporation was confirmed March 6, 1792.

By 1828 the town had grown substantially and there was strong feeling that the western part of Hebron and the eastern part were no longer compatible for the conduct of town business. Consequently a petition was sent to the Senate and House of Representatives of Maine requesting a division of town and the incorporation of the Town of Oxford. The Maine Legislature approved "An Act To Incorporate The Town of Oxford" February 27th, 1829.

Viewers of this website are referred to Marquis Fayette King's Annals of Oxford, Maine for details on the history of Shepardsfield. Also recommended is the Oxford website Oxford, Oxford County Maine.